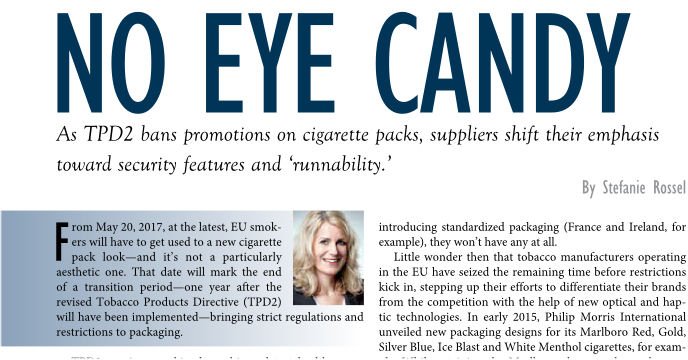 As TPD2 bans promotions on cigarette packs, suppliers shift their emphasis toward security features and ‘runnability’.

From May 20, 2017, at the latest, EU smokers will have to get used to a new cigarette pack look—and it’s not a particularly aesthetic one. That date will mark the end of a transition period—one year after the revised Tobacco Products Directive (TPD2) will have been implemented—bringing strict regulations and restrictions to packaging.

TPD2 requires combined graphic and text health warnings, covering 65 percent of the fronts, backs and tops of cigarette and roll-your-own tobacco packs. Feature disturbing pictures of rotten teeth, clogged arteries or feet with gangrene, the rotating pictorial warnings must be placed on the top edge of the pack. Each side of the pack must display a textual health warning covering 50 percent of its surface.
The health warnings’ minimum dimensions have been stipulated to ensure visibility, the European Commission says. In accordance with that goal, slim, “lipstick”-style packs, which are often targeted at young adult women, will no longer be allowed.
To further ensure the visibility of health warnings, cigarette packs will be required to have a cuboid shape, and each pack must contain a minimum of 20 cigarettes.
Promotional or “misleading” pack elements will be prohibited. This includes, for example, references to lifestyle benefits, taste or flavorings—or their absence (e.g., “free of additives”)—special offers and suggestions that a particular product is less harmful than others.
While the effectiveness of “shocking” health warnings continues to be debated, one impact of TPD2 regulations is undisputed—tobacco companies will have little pack space left to brand their products. In countries that have opted to exceed TPD2 regulations by introducing standardized packaging (France and Ireland, for example), they won’t have any at all.
Little wonder then that tobacco manufacturers operating in the EU have seized the remaining time before restrictions kick in, stepping up their efforts to differentiate their brands from the competition with the help of new optical and haptic technologies. In early 2015, Philip Morris International unveiled new packaging designs for its Marlboro Red, Gold, Silver Blue, Ice Blast and White Menthol cigarettes, for example. While retaining the Marlboro chevron, the packs now feature a soft-touch finish—a characteristic that until then had been limited to high-priced, specialized cigarette packaging. Whether such effects may be used after TPD2 takes effect is not clear yet.

Still on the rise

To find out how the new regulations are affecting the people behind the scenes, Tobacco Reporter spoke with several suppliers of core cigarette packaging components.
Of all packaging components, paperboard—the base material—will probably be the least affected by the forthcoming regulations. “Many markets show growth, and it is still too early to draw conclusions for markets affected by plain packaging rules,” says Paul Okker, business director for tobacco at the Swedish paperboard manufacturer Iggesund, which supplies two leading paperboard brands (Invercote and Incada). Whether there will be a commoditization of the board in markets with significantly enlarged health warnings or plain packaging or whether cigarette manufacturers will choose even more intricate board qualities in a last-ditch attempt to distinguish their products from the competition remains to be seen. “It will be the decision of each tobacco company, depending on their philosophy,” says Okker. “But it is an interesting thought that the last remaining way to differentiate is to choose a board with the most tactile feeling.”
For the time being, technical requirements remain demanding. “High printability is still needed also for health warnings, and runnability will still be key,” says Okker. “No one wants to slow down production—regardless of demands for plain packaging or not.”

In the runup to TPD2, cigarette manufacturers clearly increased their activities to further establish their brands and introduce new varieties. Daniela Steri, business manager of Irplast’s Bimo BOPP division, an Italian supplier of wrapping film, recalls how a one-off spike in the usage of printed shrinkable film on packs had been forecast for the first six months of 2016, as brand managers tried to consolidate or grow market share before TPD2 would kick in. “But the incremental effect has not been really significant, as many Western European markets have been using ‘price flash’ techniques on printed film to establish their relative market position over the past few years.”
Bimo may be relatively lucky, in the sense that, regardless of the new pack appearance and graphics, tobacco packaging will still require the same amount and quality of BOPP film. “So we are in fact one of the least affected parts of the packaging industry,” she says. “Clearly, should cigarette sales volumes drop significantly in some markets, we will feel the pinch like everyone else.”
There is still uncertainty as to whether, or under what conditions, printed film will be permitted under TPD2. “We don’t have a clear picture on that yet, and only time will tell. For transparent film usage, we don’t expect there to be any change in current trends. The shrinkage will still have to be perfectly adapted to wrapping machinery so that manufacturers can deliver perfect pack appearance at maximum productivity levels in their factories on every machine.”
Bimo might even benefit from the new legislation: “It has been suggested that widespread plain packaging regulations could lead to widespread product counterfeiting in some markets,” says Steri.
“We have new ‘smart packaging’ ideas in the pipeline, which will allow specific brands or stock-keeping units to become both overtly and covertly ‘original’ for consumers and authorities through the use of sophisticated printing techniques on special printable wrapping film.” Wrapping film never runs the risk of becoming a commodity, she emphasizes.
“Even though branding as we know it will be changed forever, there will still be Marlboro, Dunhill and Camel written in small letters on the packs. And every manufacturer will continue to pay the maximum attention to how they can stand out and be better, even with regulations designed to stop them. So they will be looking at productivity in their factories to maximize margins and minimize manufacturing costs. They will need to be sure that every boring plain pack with their there will be nothing else to notice, consumers are going to notice sloppy, badly applied film,” she says.
“I would even imagine that the sensory experience of the smoker will be more important, as consumers no longer buy the image but might appreciate even more than previously the freshness and quality of the smoke,” says Steri. “At Irplast we are working right now on how some special new wrapping films coming out of our R&D can help our major clients to deliver better-tasting cigarettes to their customers.”
Regardless of regulations, she says, high performance in the factory, standout appearance at point of sale, product integrity and nonstick naked overwrapping are what players everywhere are looking for. “Lately we’ve created new demand and interest with our tailored films for ultra-high speed machines, our improved printable shrinkable base film for specialized converters, and with the proven performance of our down-gauged films.”

Requirements for tear tapes will also change little under TPD2 legislation, says Ralf Schaffranke, sales director of tear tape supplier Tann Germany: “When regulation prevents the use of tear tape as a marketing tool, the expected high functionality in terms of easy opening still remains. Nowadays nobody underestimates the negative impact on brand image that the potential breaking of a woman’s fingernail can have when trying to open a pack, also in FMCG [fast-moving consumer goods]. We continue to expect a strong focus on cost-effectiveness in terms of longer reel lengths and reductions in tape width wherever possible from the industry.”
From Tann Germany’s point of view, restrictions on packaging going even as far as standardized packaging will create additional opportunities, since tear tape is the ideal carrier for covert security features such as nonvisible UV inks or sophisticated taggants in order to protect the brands and the brand owners. The majority of those features will be used in the water pipe tobacco segment, he says. “Tann has developed and provides for current market requirements combinations of overt security features, such as sophisticated print designs including microtext and fine-line printing, as well as special inks, such as OVI inks [‘color shift inks’], both to support the brand value and to protect the brands against counterfeiting and plagiarism.”

Irplast awarded with the Packaging Oscar for the Eco-Label. The company expects to generate 135 million euros in revenue in 2022

Manage Cookie Consent
To provide the best experiences, we use technologies like cookies to store and/or access device information. Consenting to these technologies will allow us to process data such as browsing behavior or unique IDs on this site. Not consenting or withdrawing consent, may adversely affect certain features and functions.
Manage options Manage services Manage vendors Read more about these purposes
View preferences
{title} {title} {title}